Samesun’s Hollywood Hostel is located on the corner of Hollywood Boulevard & Highland Ave with views over Mann’s Chinese Theater & the walk of fame! Live it up like a VIP backpacker in Hollywood and step out into the heart of the entertainment capital of the world. Everyone who visits Los Angeles must get the essential Hollywood experience - stroll the palm tree lined streets, explore music & movie making history, dine at star dazeled cafes and enjoy sunset views over Los Angeles.

Hollywood has easy access to many of Los Angeles best attractions like Universal Studios, Griffith Park, Beverly Hills, Rodeo Drive, the Hollywood Bowl and The Chinese Theater, which is directly across the road from Samesun Hollywood. Conveniently located opposite the LA Metro Line and within steps from various major bus routes makes our Hollywood hostel the perfect location to be based in Los Angeles. Step out onto the Hollywood Walk of Fame and be prepared for the red carpet to roll across our door step during the Oscars & big movie premiers. Experience the excitement of Los Angeles’ vibrant entertainment district from the comforts of Samesun Hostel Hollywood. 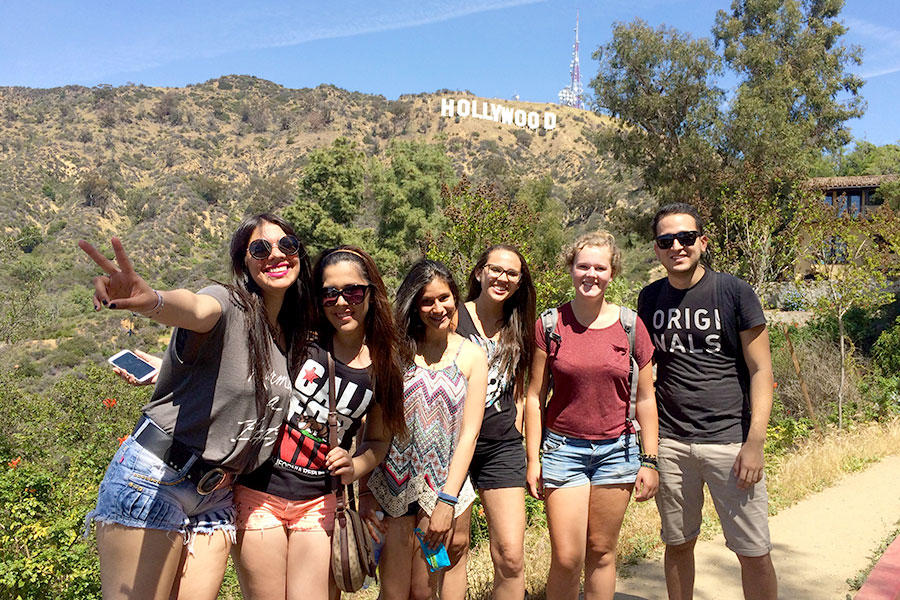 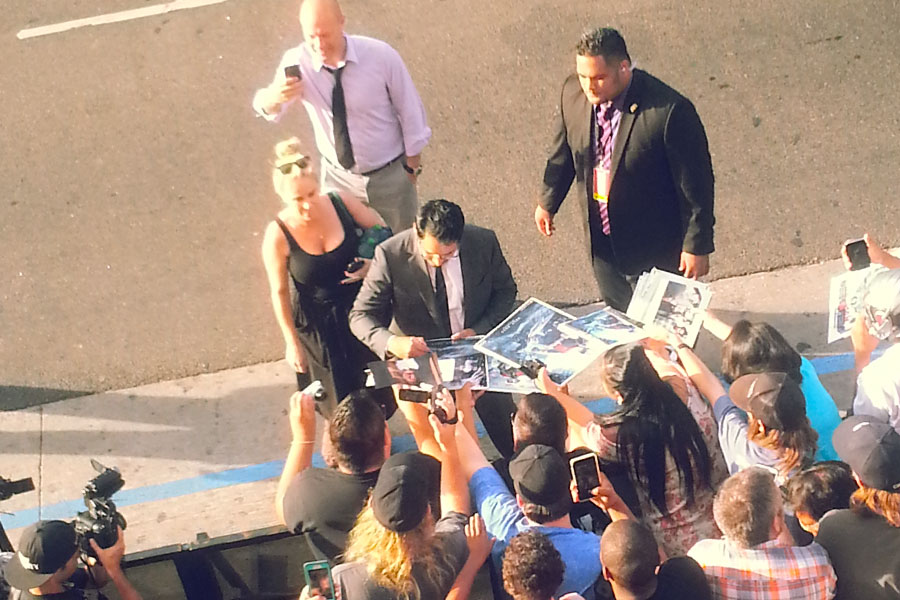 Watch movie premiers & the red carpet from our hostel 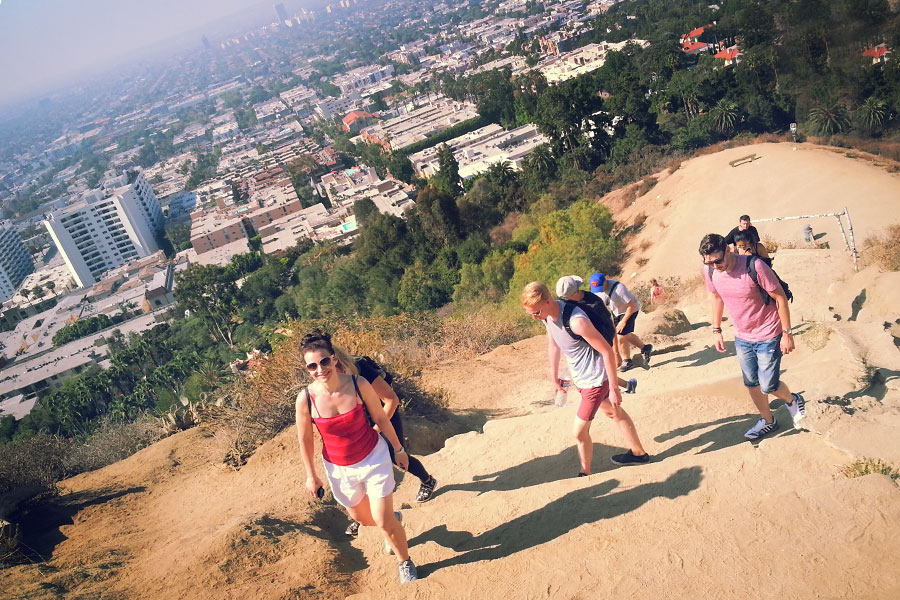 Hiking up Runyon Canyon gives amazing views back over LA! 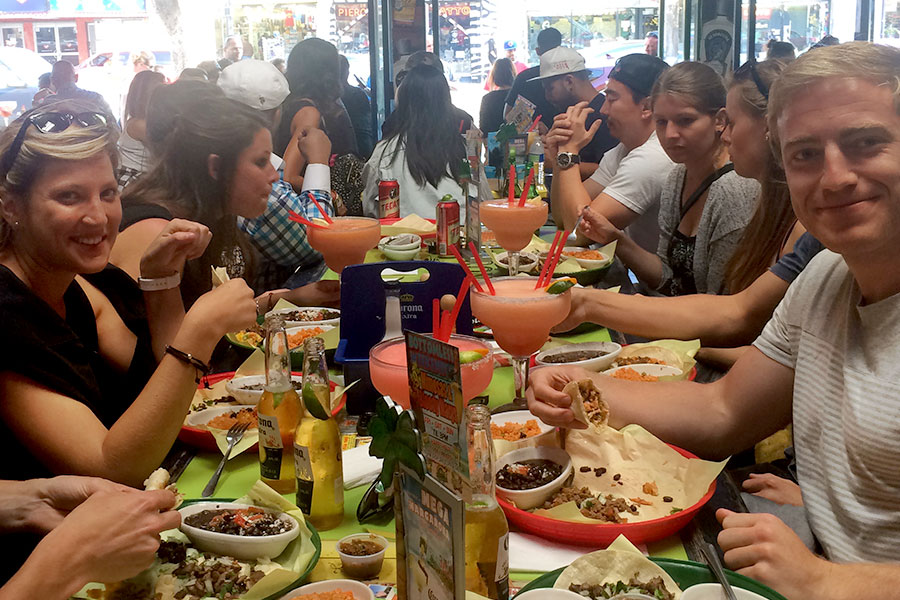 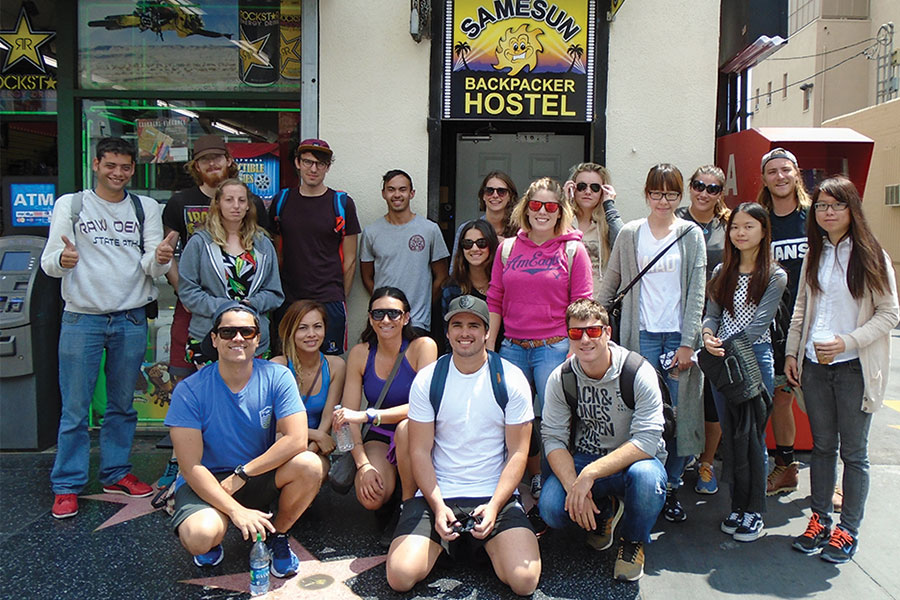 Meet your fellow travelers on our daily hostel activities! 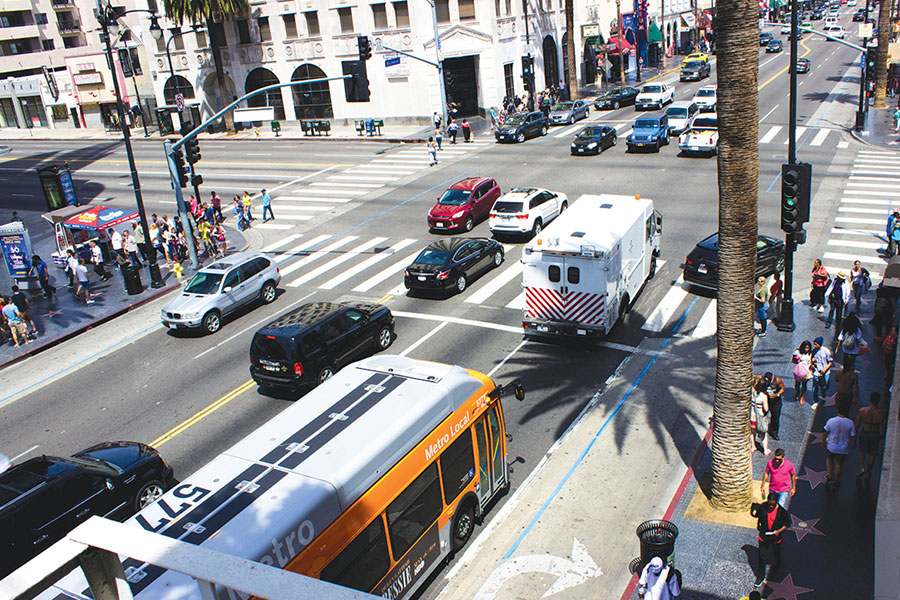 I had a great time at the Samesun Venice Beach Hostel. Everyone was very nice and sociable. The free breakfast was definitely a plus. I will be back… 😉

Perfect location and then everything else is great

Awesome hostel, perfect location, great beach views. Staff are really friendly, special thanks to Jordan for looking after me and shout out to Bae for being her brilliant self. Also, high five to Kyle - hardest working man in America.

One of the best hostels I’ve stayed in the coolest and most friendly staff, amazing location, could not have asked for anything better!

Sick location and loads of fun. Two thumbs up!!

I stayed at Samesun hostel last week and i think it was my best stop through out all my vacation it was a great hostel , great location and especially very lovely and helpful staff.

Location is great! The place is immaculate. Love the security here it’s awesome!

Budget accommodation in Hollywood for backpackers and travelers!

Looking over the bustling heart of Hollywood Boulevard, Samesun’s Hollywood hostel is a 2 level hostel with shared or private rooms & hostel facilities. From our lounge, kitchen and dorm rooms you can watch the red carpet roll out for movie premiers, film shoots and the daily bustle of the street below. Samesun took over this location in April of 2015 and have since then been doing a full hostel renovation including rooms, hallways, common areas to make sure you get the highest quality hostel experience.

Our Hollywood hostel has a range of different room types to fit your needs for budget accommodation in Los Angeles. Our accommodation in Hollywood has private double rooms, 4, 6 & 8 bed shared dorm rooms. Samesun shared dorm rooms include lockers & linens for each bed with shared washroom facilities on each level. Samesun Hostel’s private rooms have a queen bed, bed side lamps, desk, chair & mini fridge with the delux private room including a private ensuite. Every dorm bed has recently been upgraded with thick & comfy new mattresses so our guests can get a good night’s sleep. Both our private rooms and dorm rooms have ceiling fans to keep cool in the warm summer months. Both dorm & private guests have access to our lounge, kitchen & laundry facilities as well as our daily hostel activities. We are sure you will enjoy your stay with us at Samesun Hostel Hollywood! 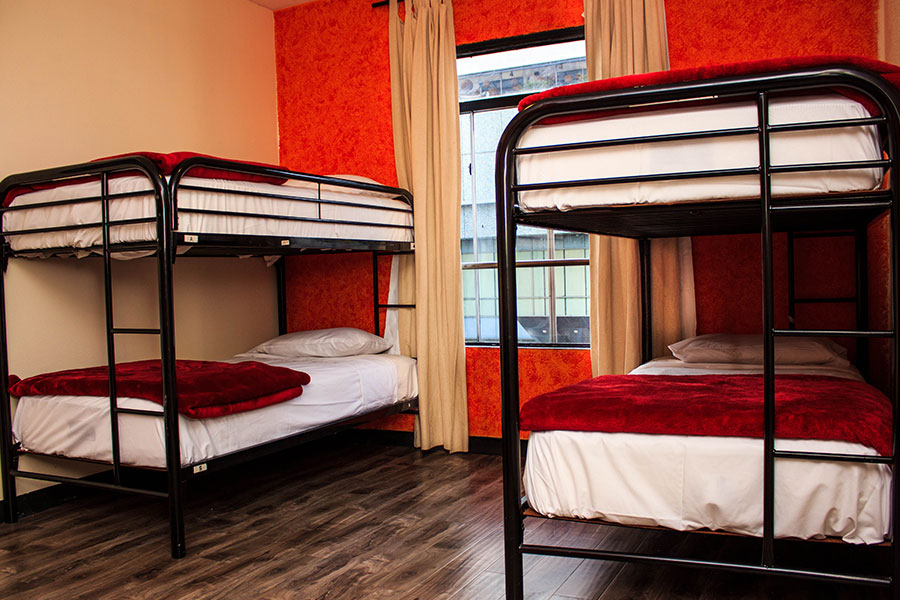 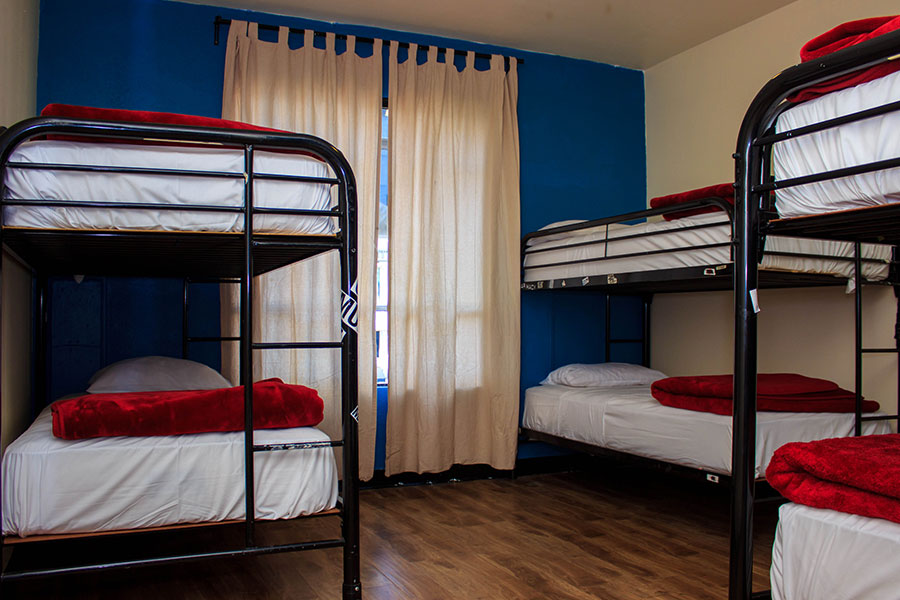 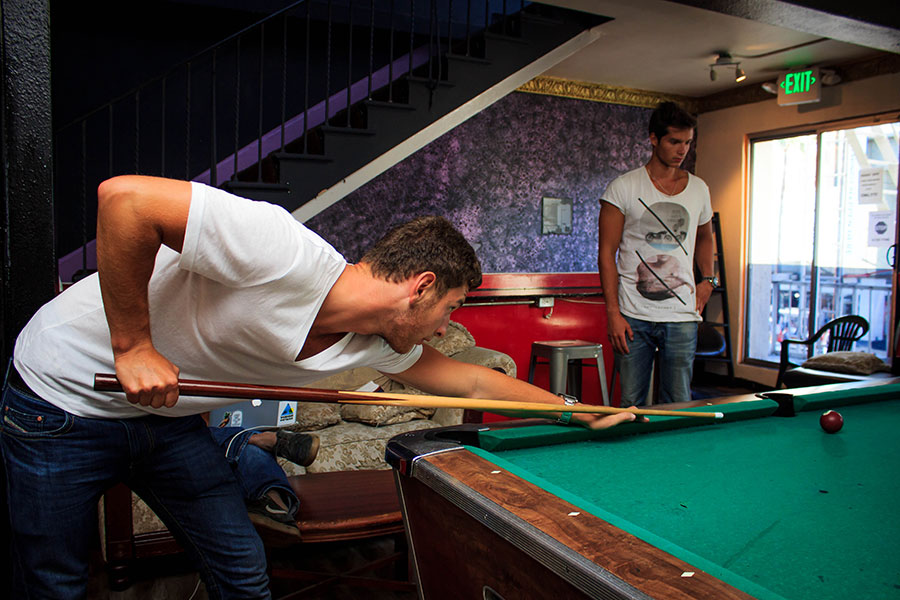 Meet other travelers around our free pool table 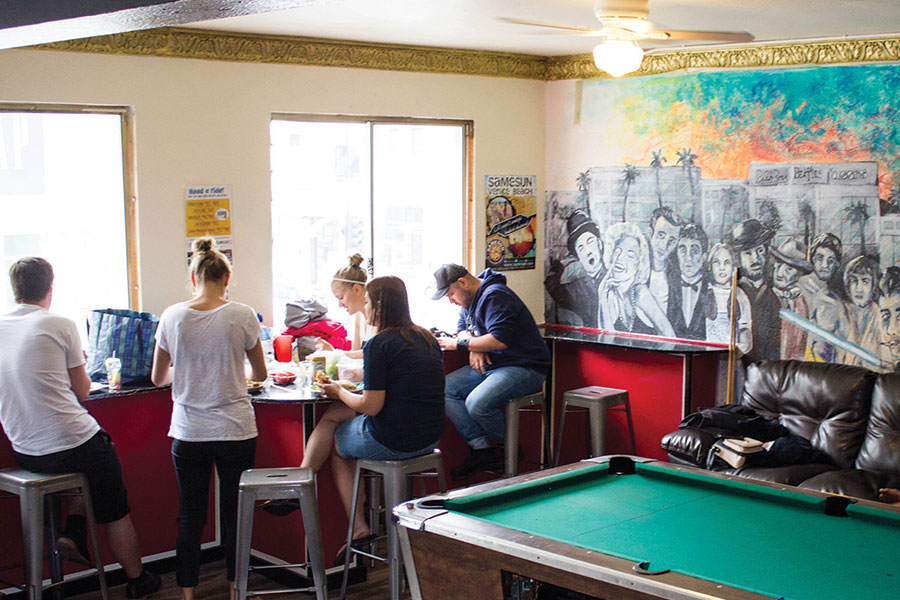 Enjoy the hostel's free breakfast while watching over Hollywood Boulevard. 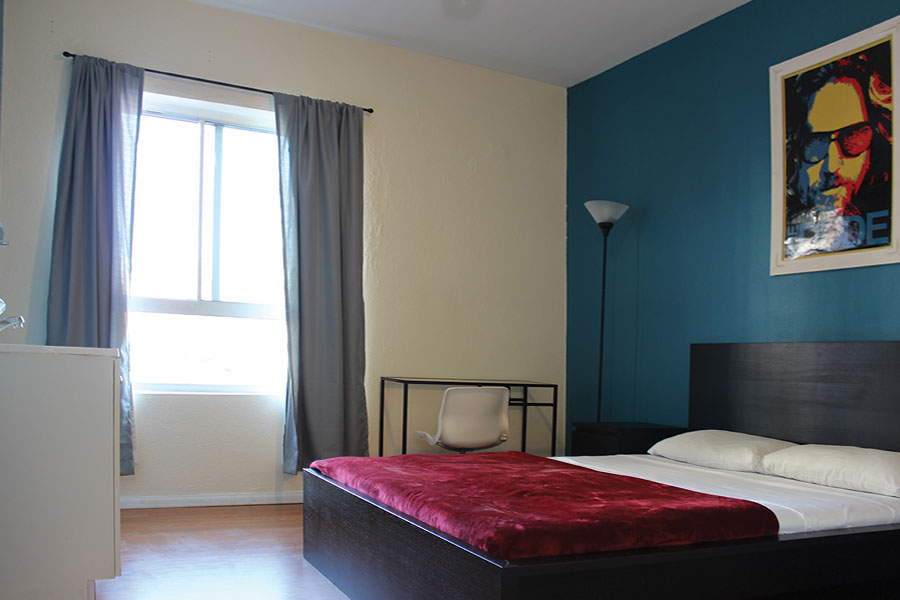 Private double rooms available with or without ensuite 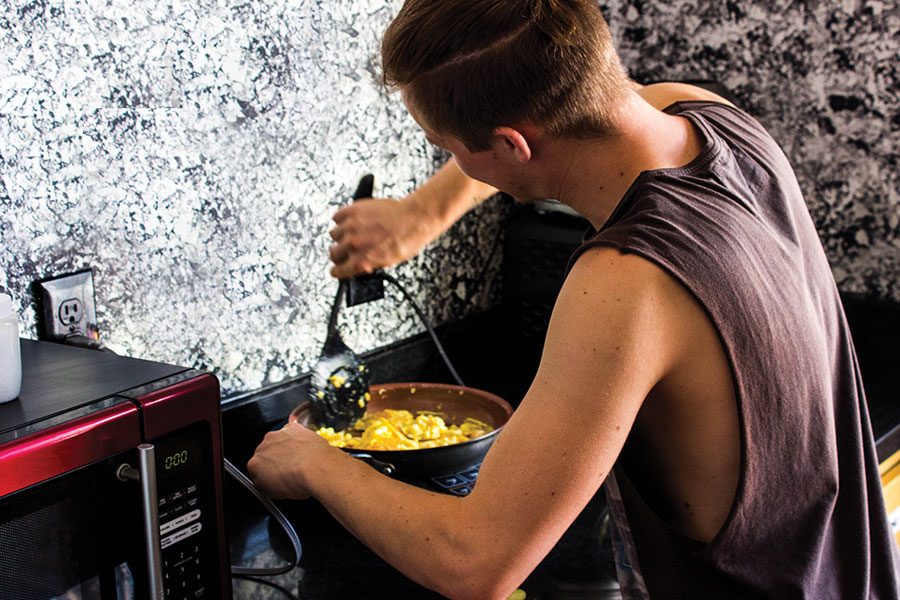 Kitchen facilities are available for guests to make their own food. 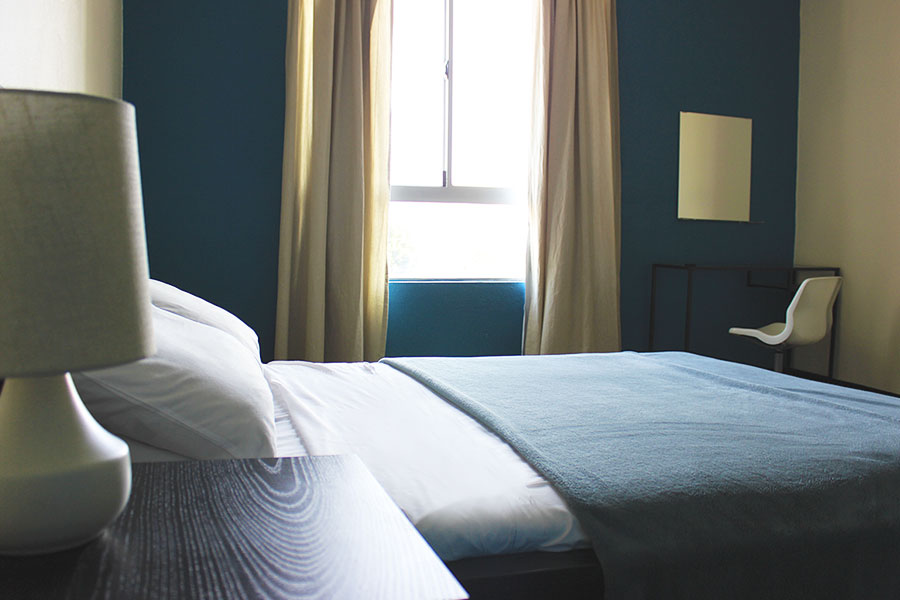 Get hotel perks on a hostel experience at budget prices. 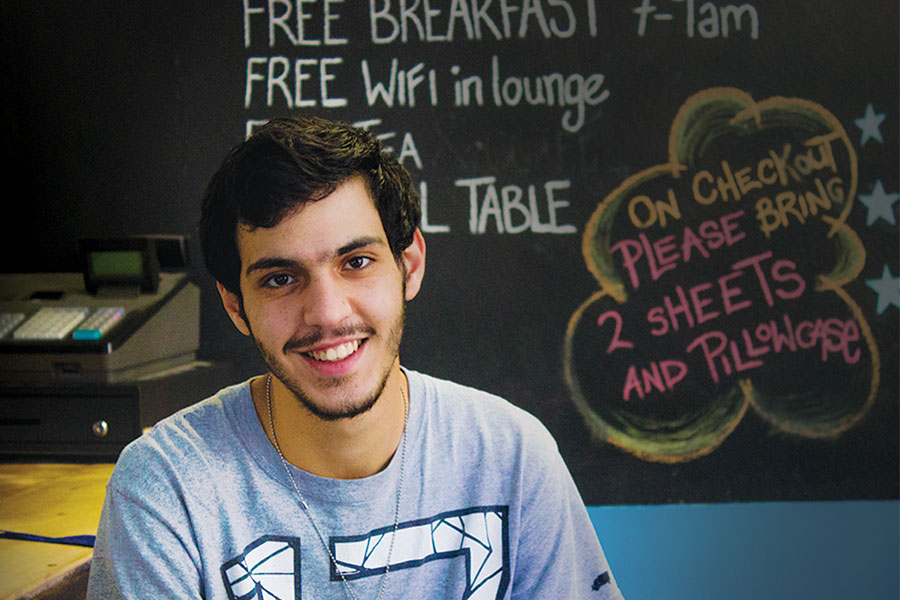 Meet our friendly staff, always wanting to help plan you next adventure. 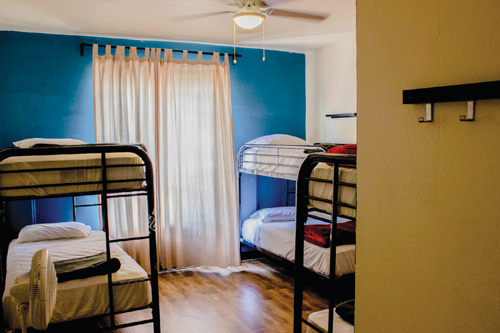 Step into Sameun's oasis hostel in the heart of bustly fastival.

Samesun Hollywood’s backpacker hostel and budget accommodation is located on the corner of Hollywood Boulevard & Highland Ave. There is easy access by bus, train & taxi. Step out of our Hollywood hostel onto the famous Walk of Fame, and cross the road for Mann’s Chinese Theater.

Click on the location you are traveling from to find the fastest route to Samesun Hollywood.

Step 1: Look for the green sign that reads “FlyAway, Buses and Long Distance Vans”. Catch the Flyaway bus from the lower terminal level at LAX and get off at the final destination which will be Union Station. Upon arrival at Union Station you will pay $7.00.

Step 2: From Union Station, take the Metro red line subway ($1.25) towards North Hollywood. Get off at the Hollywood/ Highland station. Samesun Hollywood is directly across the street from the Hollywood/Highland metro station.

Follow the orange signs for “Shared Ride Vans” outside the LAX luggage pickup area and take one of the shuttle buses. There should be an attendant wearing a red uniform. Explain to the attendant that you are going to Samesun Hollywood at Hollywood and Highland. It will cost $15 per person.

Take the red line subway towards North Hollywood and get off at the Hollywood/Highland Station. Coming out of the station, you will see the hostel across the street.

Walk to 7th/Decatur (about 1 min.) and take Bus 60 (Metro Local line). Get off at 7th Street and Metro Center. Take Metro Red Line (North Hollywood Train) and get off at Hollywood/Highland Station. The hostel is right across the street.